Is Cucumber a safe vegetable for dogs? 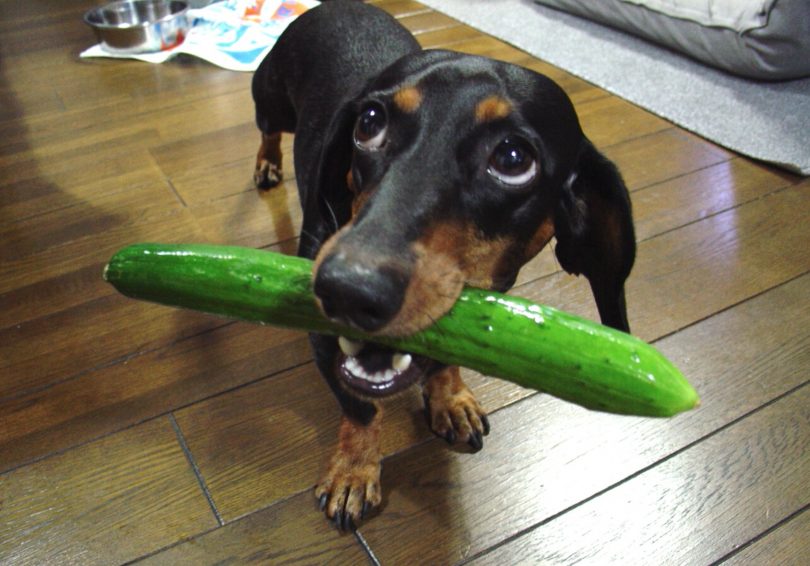 Cucumber is a healthy refreshing vegetable that is loved and widely utilized by Human beings. But even though Cucumber is a basic component of human meals, the question arises can my dog eat cucumbers?

Some of the fruits and vegetables that humans love too much can cause deadly effects on dogs such as grapes and peppers. But is it safe to share a slice or two of cucumbers with your pet friends?

Well for starters, there is no harm in sharing this vegetable with your canine friends as it can keep your dog well hydrated and not just that, cucumbers are filled with important nutrients essential for dogs’ health. However, vets highly recommend giving a small portion of cucumber to the dog so that any aversion or allergy can be sorted out before time

Is cucumber a safe vegetable for your furry friends?

Cucumber is a perfectly safe low-caloric snack for the dog. But keep in mind one thing that is not to go overboard and offer cucumbers in moderation to the dogs. Cucumbers contain only 8 calories per half-cup. Besides that, the vegetable contains a very low quantity of sodium and a negligible amount of fat in it. Cucumbers make the best snacks for dogs with weight issues.

Even though it’s a healthy vegetable, there are two potential risks involved that can unexpectedly harm your dog.

To prevent choking, try to cut it in small manageable sizes. Choking is mostly observed in small dogs or the ones that wolf down their meals within minutes. Owners who ask “Can dogs eat mini cucumbers?” should know that baby cucumbers serve as the best portion size.

As for over-feeding, it is highly recommended to offer only half of the cucumber at a time. Other than that, do not this vegetable to your dog if it didn’t taste cucumbers before as it can cause gastrointestinal problems.

Some people also ask “can dog eat cooked cucumbers?” the answer to this question is yes they can eat it in that form too.

What are the Vitamins and Minerals found in Cucumbers?

As mentioned above Cucumbers are known for their refreshing taste but do you know that it is filled up with essential minerals and vitamins that are excellent for the health of your dog. An average Cucumber contains about 96% of water.

Here is a list of minerals and Vitamins that Cucumber offers:

Even though this vegetable holds essential nutrients, the dogs should still acquire all the crucial needed nutrients from their dog food. Dogs need fats and protein as the main component in their diet to meet their nutritional needs in a day. Hence, do not offer the dogs a vegetable-based diet only.

Besides that Cucumbers also produce a hormone known as Cucurbita Ficifloia which enables the pancreatic cells in dogs to produce the right amount of insulin in their bodies thus proves to be the best for diabetic canines. The previous information answers a frequently ask question “Can a diabetic dog eat cucumbers?” A study suggests that Potassium in cucumbers is linked with the heart health of the dogs and Vitamin K promotes bone strength in our canine friends.

What type of cucumbers can dog eat?

Even though the answer to the question can dog eat cucumber is pretty simple. But there is another question asked sided by side that is “what can dogs not eat?” or form of this refreshing vegetable that shouldn’t be given to the dogs. An everyday cucumber is a safe option for canines but when it comes to the pickled version of Cucumber do not share it with dogs not even a small chunk of it. Pickled Cucumbers are filled with Sodium and Vinegar which is very harmful to your dog’s health. Not only it can upset the dog’s tummy but it can also cause severe kidney problems.

Can puppies munch on Cucumbers?

Cucumbers are a safe option for dogs but are it a good option for younger dogs? Well, as long as a puppy is weaned and is capable of eating solid foods, Cucumbers does not cause any harm to its health.

Yet still, keep in mind that the digestive system of puppies is still on the road of development, feed them with only small portions and as a sporadic treat. If the puppy is still on milk, do not offer them this vegetable as it can severely affect its stomach.

Even though it is a healthy snack option but there are certain situations when owners should feed the dog cucumbers.

Can dogs have Cucumber skin?

Now we know that cucumbers are dog-friendly vegetable but the question Is Cucumber with skin good for dogs? Well, the skin itself contains multiple nutrients but sometimes dogs find it hard to digest. Thinly slice skinned cucumbers so that dogs can eat it easily. Many owners also show the concern and ask question like “can dog eat cucumber seeds?” the answer to this question is yes dogs can.

Cucumber is a refreshing vegetable that is liked by human beings. No salad or sandwich is complete without it. But the question arises here is: “can dogs eat cucumbers?” Yes, dogs can eat cucumbers in moderation as it can be the best low caloric treat for them. Do not over-feed them with cucumbers and cut in manageable portion sizes before serving it to the dogs. you can also read cephalexin for dogs