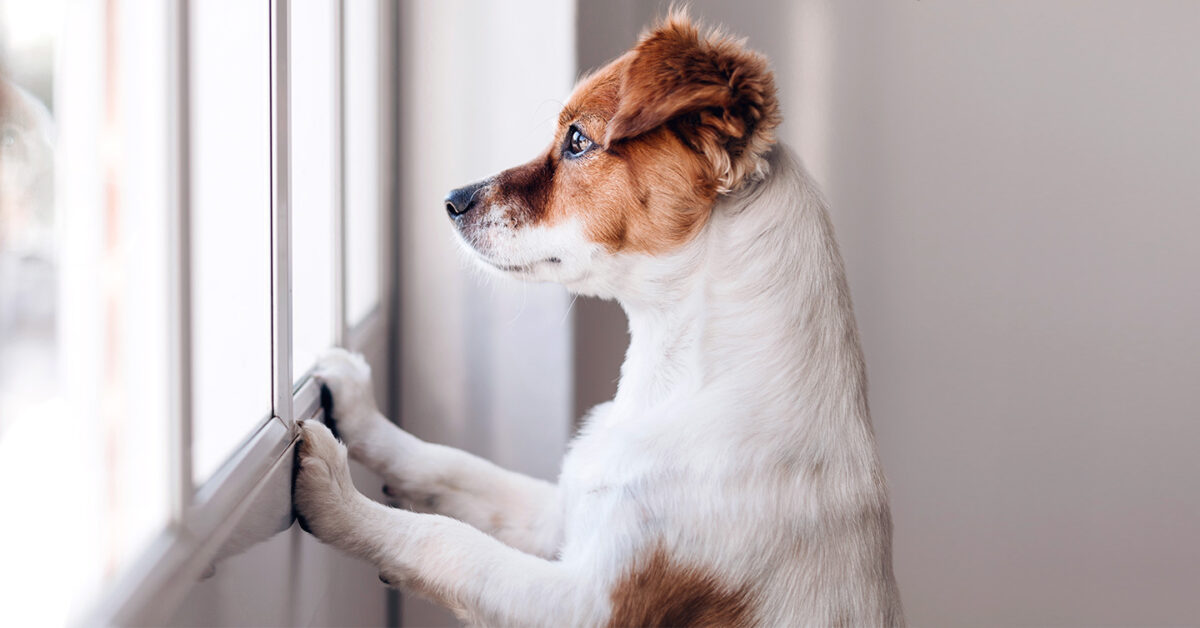 Dog Anxiety is used to describe a condition where a dog exhibits distress or behavioral problems as a result of fear, nervousness, or concern.

In dogs and even humans, fear and uneasiness are usually normal responses to certain stimuli. Heightened levels of anxiety expressed in behavioral abnormalities can be signs of an anxiety disorder.

In dogs, behaviors like that are very unhealthy and can be potentially dangerous to owners.

Anxiety in dogs is actually quite common. Over 70% of dogs show signs of it and fear but the severity of symptoms varies from dog to dog. Studies even show that some breeds are more likely to develop an anxiety disorder than others.

However, regardless of the breed of your dog, this article seeks to help you understand dog fears, spot any symptoms of it and aid you in helping your pet prevent and manage their stress

This can be caused by a variety of reasons. The most common include;

Anxiety caused by fear is characterized by a feeling of apprehension in the dog when they come in contact with the stressor. Sometimes, when the fear is caused by a previous traumatic event like drowning, for example, even the slightest similarities with the memory of that circumstance like trying to give them a bath in a bathtub, is enough to generate a response from your pup.

Fear can be triggered in a dog for different reasons. It also could be their response to loud noises like fireworks, unfamiliar people, storms, strange places or environments, being locked up, etc

Separation is the most common cause of specific anxiety in companion or pet dogs. It is characterized by overdependence or attachment to their family or owners.

When their beloved one leaves, the anxiety kicks in and they exhibit distress behaviors such as barking or howling, chewing, destruction, and toileting or house soiling.

They may also be restless, shake, salivate, refuse to eat, become quiet and withdrawn, and in some cases, attempt escape resulting in injuries and self-harm.

Dogs who have experienced some form of loss of attention and love like dogs that have been abandoned, had multiple owners, or been adopted from shelters develop this type of anxiety more than others.

Anxiety caused by aging occurs in older dogs, typically 8-11 years old or even older. There is often the result of a decline in a dog’s cognitive functions caused by Cognitive Dysfunction Syndrome (CDS). This is similar to dementia or Alzheimer’s disease in aging humans.

The gradual loss of senses and mental alertness can be quite confusing and terrifying for the pet. This will cause them to become nervous, skittish, easily startled and generally increase their anxiety level.

Anxiety in dogs is usually detected by these symptoms:

This is the most dangerous symptom of it. It can be in a direct or indirect form, depending on the conditions. Direct aggression is more dangerous and happens when a dog acts aggressively toward people or other animals. They usually bark, growl, bare their teeth and in some cases, attack and attempt to bite the object of their antagonism.

Indirect aggression, also dangerous, happens when a person comes between the dog and the object of their aggression. Nevertheless, this symptom, in extreme situations may turn dangerous or life-threatening for the people involved, especially kids.

Dogs could end up urinating or defecating in the house even when they are housebroken. Those with separation anxiety do this only when their owner is away.

The pet becomes quiet, lacks interest in playing or other things they once enjoyed, and changes sleeping or eating patterns

This includes digging, chewing, or shredding objects. This particular sign is very common with separation anxiety. Some dogs destroy areas around the exits their owners use and become injured when trying to escape their confinement.

● Panting and pacing even when it’s not hot.

● Self-harm, including excessive licking or chewing.

● Running away or cowering in the corner of a house.

If you spot signs of dog anxiety in your pet, there’s no need to fret. It can be solved by training, prevention plans, and if needed, medications. Some ways to treat your dog include:

● Exercising your dog. This includes taking walks and playing outdoors. It helps relieve them of their anxiety.

● Mental stimulation with puzzles or tricks, especially for dogs with anxiety caused by aging.

Studies show that music decreases anxiety in dogs. Soft rock, reggae, and classical music were found to be the most effective. Playing music that your dog likes at a reduced volume will help calm them down.

Some examples of some songs you can play include:

Touching or massaging your dog, especially at pressure points like the feet, the ears, and the top of the head regularly helps them stay relaxed and reduces their stress and anxiety levels.

This involves helping your dog get used to the object of their stress long-term. For example, for dogs with separation anxiety, you can practice leaving them alone for short periods, increasing the periods as your dog gets used to it.

This is a process of training your dog to associate their stressor with something good. For instance, for a dog scared of noises, you can give them treats to reward while setting off those sounds at a reduced volume and increasing the volume subsequently as they get used to the sound.

In cases of a serious anxiety disorder, your veterinarian may prescribe antidepressants like fluoxetine and clomipramine.

To calm an anxious dog there are some measures you can employ. They include:

The best way to treat anxiety is to talk with your veterinarian. Your veterinarian’s expert advice and diagnosis will help you properly recognize the type of anxiety your dog suffers from, and its possible causes and triggers.

Visit a vet as soon as you notice any signs of anxiety in your dog and never try to self-prescribe or use a medication without a prescription from a professional,