Can Dogs Eat Spinach? How Can I Give Spinach To My Dog?

Green leafy vegetables are safe for dogs and now you all must be wondering can dogs eat spinach too? Yes spinach is a great vegetable for dogs packed with Vitamins and Minerals. Some people have misconceptions regarding spinach for dogs. In this article I will discuss about the benefits of spinach for dogs.

Spinach is enjoyed not only for its delicious taste but also because of its benefits. Spinach a green leafy vegetable that contains Vitamin K, Vitamin A, Vitamin B, Vitamin C along with fiber and minerals. The best thing about spinach is that it is one of the anti-cancer foods. It is good for your dog’s vision and boosts the immune system as well. If your dog is anemic then serving some cooked spinach is a good idea. Some pet owners think that spinach causes kidney failure in dogs due to the presence of oxalates in it. Don’t worry because moderate amount of spinach won’t hurt your dog at all.

The leaves of the spinach when fresh are full of health benefits. Make sure your clean them well before cooking. The leaves once rinsed should be chopped and then cooked without any spices and things like onion and garlic. Raw leaves will give your dog digestion issues. So the best way is to serve them cooked.

Your dog cannot have spinach stems. Once rinsed the stems should be removed and only the leaves are to be chopped. You will feel that the leaves are not only hard but also difficult to digest. The right way is to discard them rather than cooking them along with leaves for your dog.

How Can I Give Spinach To My Dog?

Pet owners find them in hot waters when they think of giving spinach to their dogs. In the lines below I will discuss with you the best ways of serving spinach to dogs.

You must know that raw leaves of the spinach should not be given to dogs directly. It is not easily digested and give stomach problem to dogs. So the raw spinach leaves should be avoided to be served to dogs and cats.

When it comes to boiled spinach for dogs then it is not the right way as spinach loses most of its nutrients upon boiling. So it’s better to cook the spinach rather than serving boiled. 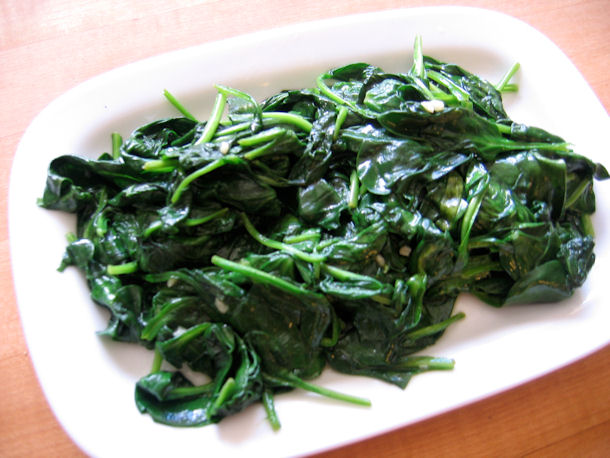 Cooked spinach is one of the best ways of serving it to dogs. Once then you have to keep in mind is that prepare it without butter, onion, garlic and seasoning. The leaves once rinsed should be finely chopped and then cooked. So if you ask can my dog eat cooked spinach then yes he can. You can also serve cooked spinach with other foods to dogs.

Uncooked spinach is just like the raw spinach which is not advised to dogs. The reason behind is that any uncooked leafy vegetable is not very much liked by pets. And also it is harder to digest in uncooked form. So you should not give uncooked spinach to your dog.

Steamed spinach is ok for dogs but ensure that you are steaming it without adding any onions, garlic or spices. Fresh spinach needs to be rinsed and then chopped before steaming it. Now you can serve it alone or mixed with your dog’s routine food.

Your dog can enjoy baby spinach but only in its cooked or steamed form. Some pet owners think of giving baby spinach leaves to their dogs but it is not a good idea and should be avoided.

The best way is to buy fresh spinach for your dog and if you think it is not available then you can serve frozen cooked spinach to your furry friend. The frozen veggies may not have the goodness of a fresh vegetable. So it is up to you that whether you want to give frozen spinach to your dog or not.

As we all know that canned food is not too good for dogs. There are present high levels of sodium in canned food and when it comes to spinach then make sure you serve your dog the freshly cooked one.

Can Dogs Eat Kale And Spinach?

Kale is also a darker green vegetable similar to spinach. If your dog has no problem with spinach then it means that he can eat kale too. Never mix the too together as it one or the same thing. Serve one at a time. Larger amounts of both these vegetables cause kidney and bladder problems in dogs.

Will Spinach Hurt My Dog?

If your dog has eaten lots of spinach then it will definitely hurt him. Larger quantities of spinach eaten by dogs cause kidney and bladder damage. So you should serve moderate amount of spinach to dogs.

Some Considerations About Spinach For Dogs:

Spinach contains higher levels of oxalic acid. If the spinach is consumed in larger amounts then the high levels of oxalic acid will simply block the ability of body to absorb calcium. This will ultimately lead to kidney problem. It means that you are advised not to serve your dog larger quantities of spinach on daily basis as it will lead to kidney and bladder problems in the long run.

Like other green vegetables can dogs eat spinach safely? Spinach is good for dogs as it contains dietary fiber, essential vitamins and minerals. The high amount of iron in spinach makes it a good treat for anemic dogs. Make sure you serve it cooked. Too much spinach should be avoided as it causes kidney problems in dogs.